The New Enterprise Project is 100% owned by Pershing Resources Company (“Pershing”) and located within Mohave County, Arizona, 10 miles southeast of Kingman, Arizona, and 2 miles from Interstate Highway 93. The New Enterprise Project occurs within the Laramide Arc between the Mineral Park (20 miles to the northwest) and Bagdad porphyry Cu-Mo mines (45 miles to the southeast). Continental scale tectonic geological processes related to the Laramide Arc within Arizona resulted in the formation of porphyry Copper mineral deposits that account for approximately 65% of the United States annual copper production. 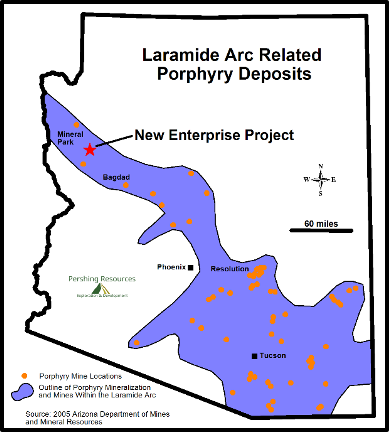 The 310 unpatented lode mining claims that makeup the New Enterprise Project are a contiguous group of claims totaling approximately 6,404 acres (approximately 10 square miles) with known surface bedrock outcroppings of porphyry-style; copper (Cu), gold (Au) and molybdenum (Mo) mineral occurrences. These mineral occurrences are considered by Pershing to be a direct indication of the potential for much larger, multiple, and concealed, porphyry Cu, Au, and Mo mineral resources within the project area. It is anticipated that highly prospective drill targets can be identified by applying state-of-the-art geophysical methods along with detailed follow-up geological mapping and surface sampling. Based on the current characterization of the exploration targets, the project area is generally divided into a north and a south portion along the east-west trending McGarry’s Wash. 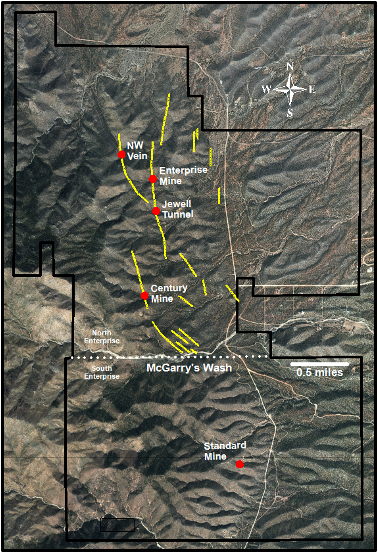 Porphyry-style Cu-Au mineralization within the northern portion of the project area can be directly observed in a suite of relatively long (traced for more than 2 miles along intermittent outcroppings) north-south trending vein systems. “Hot Spots” within the vein systems outline alteration and mineralization indicative of a potential upwelling of at least one Cu-Au mineralized porphyry system. As such, the mineral resource target is at an unknown depth, potentially within and around these veins, within the surrounding Precambrian host rock traps to the veins, and/or within mineralized porphyritic rock within or along the base of the Precambrian roof rocks. Alteration and vein systems appear to be coincidental with a discrete ovoid shape readily identified topographically, that may highlight the outline of an underlying intrusive. 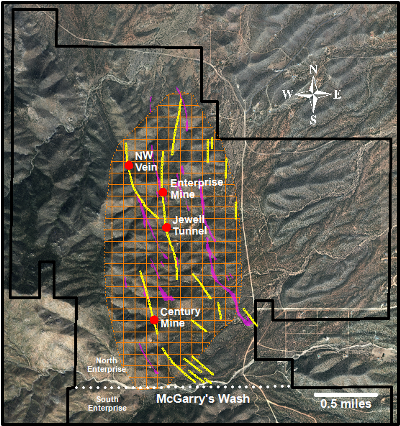 Porphyry-related Cu-Au mineralization within the vein systems appears to be associated with an early occurrence of porphyry intrusive rocks, quartz veining, and intense alteration. Historic past production focused primarily on relatively younger narrow high-grade Pb-Zn-Cu-Ag-Au lenses. The early lower grade porphyry Cu-Au mineralization was not the primary interest for miners during the early 20th century as it was not as obviously mineralized. Limited historical reports from this time reported at the 200 foot level in the Enterprise Mine Shaft; 15 feet of 3% Cu (no gold assays reported), and at the 400 foot level in the Standard Mine; 14 feet of 2 to 3% Cu and 0.25 oz/t Au. At the Century Mine, Cu was reported as the primary metal recovered with secondary Mo and Zn. Recent grab sample assay results collected by Pershing personnel from early porphyry-style mineralization within the “hot spots” reported Au assays ranging from below detection limit up to 35.3 g/tonne. None of these early artisanally mined locations have been drill tested for their potential association with a porphyry Cu-Au mineral resource.

A soon to be completed airborne magnetic survey and follow-up mapping and sampling is anticipated to identify specific priority drill targets to test the potential of a porphyry-style Cu-Au mineral resource in association with the vein systems near surface (<300m). 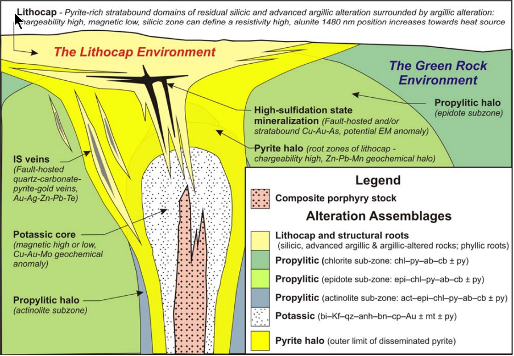 Relatively anomalous, low-grade porphyry Cu-Mo mineralization has been demonstrated to occur within the southern part of the New Enterprise Project (A&M Minerals 2013 drill hole data). Opposing azimuth directions from the same drill setup for drill holes 02 and 03 suggest the horizontal extent of the low-grade Cu-Mo mineralization could exceed 200 metres. Work by A&M Minerals to follow-up on the anomalous result was not completed. 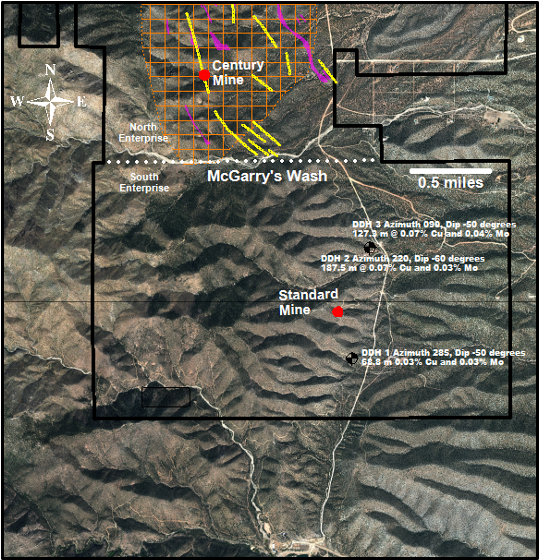 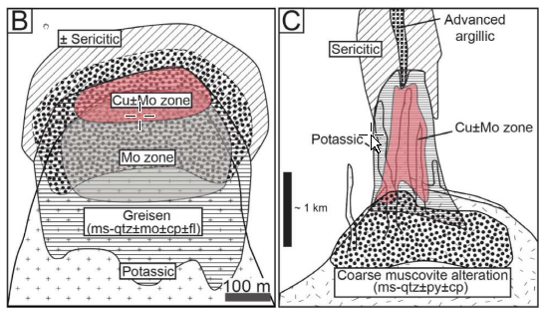 Further evidence countering the “root zone” interpretation is the presence of extensive low temperature argillitic alteration in the form of montmorillonite as demonstrated by the recently acquired high resolution hyperspectral image (PhotoSat, 2019). The hyperspectral image also outlined an extensive area of sericite alteration coincident with a bedrock mapped sericite-pyrite “shell” (Vuich, 1974). Pershing is considering the argillic and sericite-pyrite “shell” (phyllic) alteration to be indicative of a relatively large porphyry related hydrothermal alteration system that spans an area over 3 miles long and up to 2 miles wide, mostly within the New Enterprise South Project area. 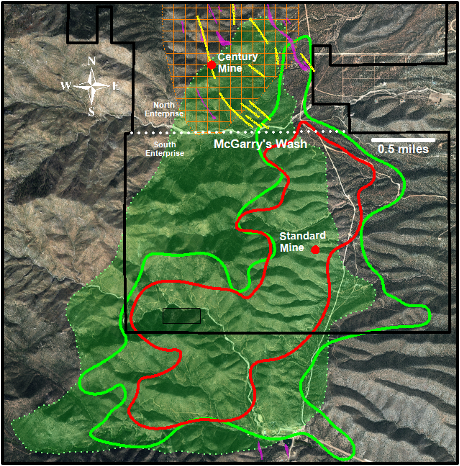 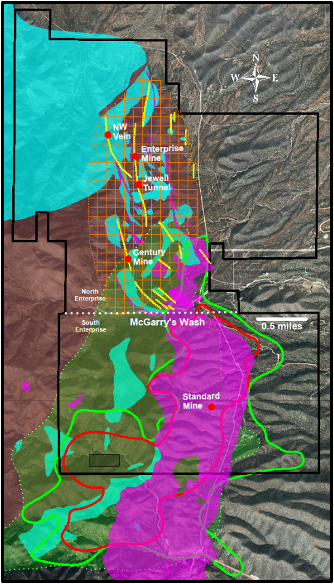 A soon to be completed airborne magnetic survey will be integrated with the recently completed hyperspectral satellite imaging to assist in the characterization of the alteration, mineralization, and lithological contacts. Follow-up mapping and sampling is anticipated to identify priority drill targets to test the potential for porphyry related Cu, Au, and Mo mineralization within the New Enterprise Project to depth.